The colder weather signals more than just the arrival of the holidays. Flu season is here!

Although anyone can contract influenza at anytime—between 5% and 20% of Americans get the flu at least once a year—it’s no secret that winter weather creates the dangerous conditions that make influenza particularly contagious.

For example, during the 2017-2018 flu season, the Centers for Disease Control (CDC) estimated that more than 900,000 people were hospitalized, and more than 80,000 people died from the flu, including 185 children. Patients age 65 and older represented approximately 58% of influenza hospitalizations during that season.

Given the potentially devastating effects of the flu, it’s no surprise that the vaccine is recommended for everyone starting at age 6 months. During the 2016-17 flu season, the vaccine prevented an estimated 5.3 million illnesses, 2.6 million medical visits and 85,000 flu-associated hospitalizations.

Still, healthcare organizations continue to face challenges with effectively conveying the risks of influenza to patients and motivating them to get their annual flu shot. But without knowing key data points—such as what percentage of patients actually get the flu vaccine, which patient groups are most likely to get their flu vaccines, and where they prefer to get vaccinated—it will be difficult for providers to improve their outreach and set realistic goals.

To help address that information gap, our research team, Phreesia Patient Insights, showed more than 16,000 patients a short message about the importance of getting a flu vaccine, and then asked them to complete a short survey. 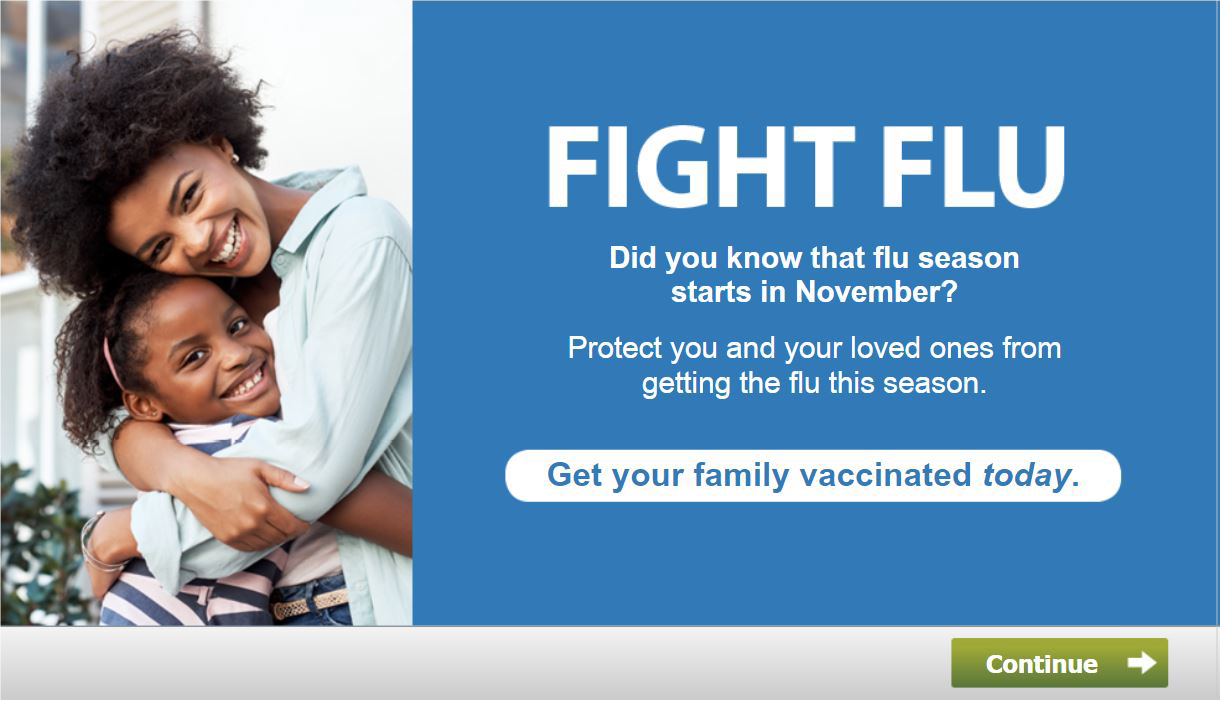 Here’s what the survey responses revealed:

As patients get older, they are more likely to get their annual flu vaccine

Overall, 58% of surveyed patients said they get their flu vaccine every year. However, that number jumps to 78% among patients age 65 and older, which could be attributed to several factors, including providers’ efforts to push vaccination among older patients because of their increased risk of severe flu.

On average, nearly two-thirds of patients said they were very likely to get a flu vaccine this year 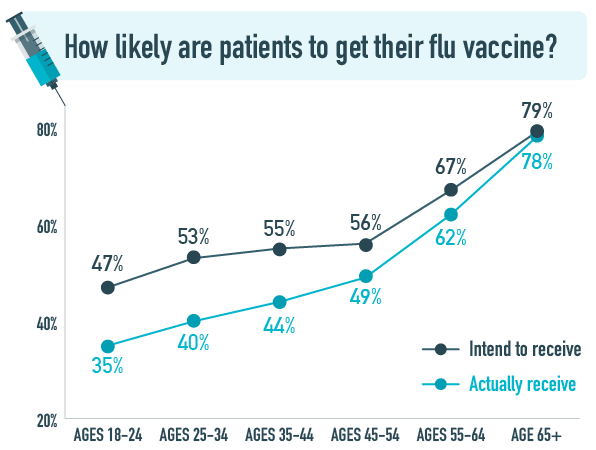 According to Phreesia’s survey, patients aren’t looking exclusively to their healthcare providers to get their flu vaccine. However, it is still the most popular option.

Most patients haven’t received their flu vaccine yet

Flu season begins in November and can last until as late as May, with the peak number of illnesses occurring between December and February. When Phreesia Patient Insights conducted the survey in November 2019, 10% of respondents across all age groups had received their flu vaccine, and 13% of patients age 65+ had already been vaccinated.

Prompting patients to get the flu vaccine works

Phreesia’s survey data shows that when patients are shown short, engaging content, they’re more motivated to talk to their healthcare provider about getting the flu vaccine. When asked about the flu vaccine content they saw, 39% of patients said it was very motivating compared to other content they had seen.

Every year, people of all ages, and particularly older adults, are at risk of contracting the flu, especially during the winter months. This flu season will be no different. It’s imperative that healthcare organizations engage with their patients and educate them on the importance of getting vaccinated.

Learn how Phreesia Health Campaigns can help you target specific patients and prompt them to get preventive-care services, including flu vaccines.

Healthcare’s digital transformation: How consumerism is reshaping the healthcare landscape

Your information was successfully submitted to Phreesia. Our experts will contact you within one business day.

If you have any further questions or would like to speak to a Phreesia representative immediately, please call (888) 654-7473.

Are you reading Phreesia Insights?

Phreesia’s content delivers the information you need on the topics you care about.